A badly injured young cat was recently admitted toa London-based animal rescue after falling from an eleventh-floor window. Fortunately, May, a seven-month-old Domestic Short-hair, managed to hold on to her eight remaining lives after the dramatic tumble, which resulted in a broken pelvis.

Sadly, May’s owners couldn’t afford to pay for the treatment she required to fix her pelvis, so they brought her into Battersea’s London centre. May was rushed to the clinic, where the expert veterinary team performed emergency surgery to realign her pelvis, which was fractured in several places. 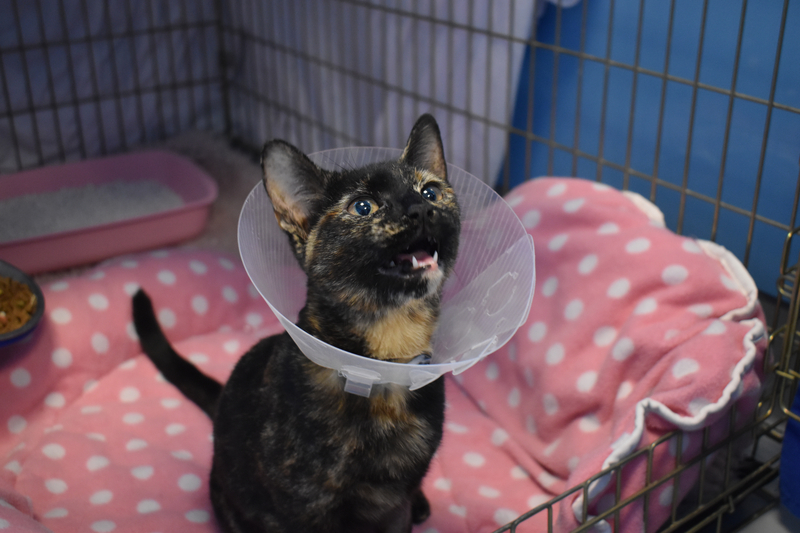 Following the procedure, May went to stay with a foster carer to allow her to convalesce in a home environment. The surgery didn’t faze May though, she was up and moving about a few days after the procedure. May’s foster carer had to prevent the active young cat from jumping onto furniture during her recovery so as not to injure herself further.

Cattery Team Leader at Battersea, Rosa Steele, said: “May’s swift recovery is verging on miraculous considering how far she fell. It’s not often that we hear of cats who have fallen from eleven stories high, however cats climbing to great heights or jumping out of windows and injuring themselves is not unheard of. Owners who live above ground floor level would do well to remember to keep their easily accessible windows shut if their cat has an adventurous nature, or at least create a barrier to prevent their pet from exploring further if there is a danger of them falling out.

“May’s story is proof that cats won’t always land on their feet, and so precautions should be taken to prevent cats from taking a tumble.”

Now fully recovered, May and her story captured the hearts of Collin Goodhew and his family, from Berkshire, who decided to adopt the lucky cat.

Collin said: “After we brought May home, we tried following Battersea’s advice and keeping her in one room so that she could get settled in, but after a few days it was clear that she desperately wanted to explore the rest of the house. She likes to follow me from room to room and tries to climb everything – including the gap down the side of the bed.”

While May’s adventurous streak is clearly here to stay, Collin also says that May finds time to relax as well: “She loves sleeping next to me on the sofa and playing with her toys, including her favourite ping pong ball.”